“Rock the House for Animals!” livestream concert to support critical work for all animals, including help for pets and their people who are impacted by COVID-19

WASHINGTON, April 24, 2020 — On April 30, international superstar and multiple Grammy Award winner Rob Thomas; singer, songwriter Chris Daughtry; and singer, songwriter Gavin DeGraw will present “Rock the House for Animals!” a livestream event featuring musical performances, interviews and appearances by special friends of Rob and Marisol Thomas. The event – with a pre-show at 7:00 p.m. ET and the live concert from the musicians’ homes at 8:00 p.m. ET – will help the Humane Society of the United States, working together with Sidewalk Angels Foundation, to support critical work for all animals, including help for pets and their people who are impacted by COVID-19. The livestream will run on Facebook, YouTube and Twitch.

In making the announcement, Thomas said, “Animals are everything to our family. We have two rescue dogs who are our life, and through our charity Sidewalk Angels Foundation we provide support to over 20 no-kill animal shelters and rescues across the U.S. This pandemic will not stop us from helping those who need us now more than ever. Marisol and I have partnered with the Humane Society of the United States for years and it’s always an honor to collaborate with them, especially now. My talented friends Gavin and Chris – also animal lovers – were thrilled to join this great event.” 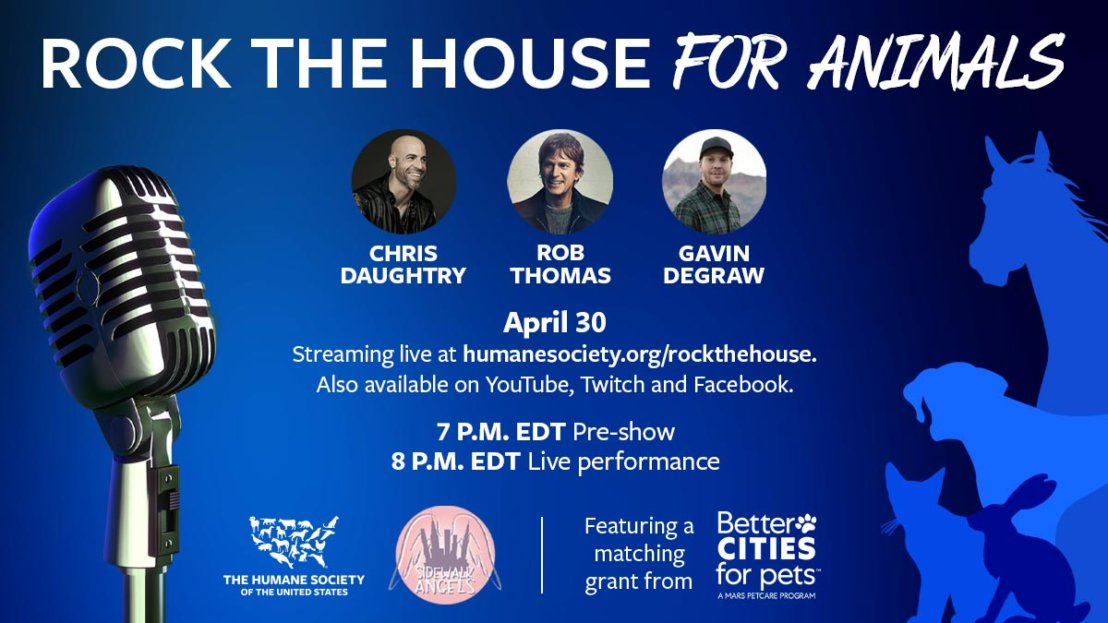 Kitty Block, president and CEO of the Humane Society of the United States, said, “What an incredibly generous and talented trio. We are beyond grateful to Rob Thomas, Chris Daughtry and Gavin DeGraw for stepping up for animals and the Humane Society of the United States, now and always. When the world is turned upside down by tragedy and fear, music and animals have the power to bring us all together.”

Daughtry added, “I am excited to work with Rob and Gavin and to support the Humane Society of the United States and Sidewalk Angels Foundation. It is deeply important for us to do what we can during this critical time and help support keeping animals with their families.”

DeGraw said, “My dog Buddy is everything to me. It is an honor to be invited to this party with Rob and Chris and for us to Rock the House for Animals together. Our pets love us unconditionally and deserve everything we can provide for them.”

COVID-19 is putting our nation’s pets at risk as people lose the ability to pay for needed medical care and supplies for their animals. As we have seen during other times of economic distress, pet owners can be forced to surrender their beloved companions when the cost of caring for them exceeds their ability to pay.

The Humane Society of the United States works year-round to support local shelters and rescues and to help keep people and their pets together through initiatives like its Rural Area Veterinary Services and Pets for Life programs. During this unprecedented crisis, the HSUS is continuing these crucial efforts by providing support for animals and their people who are impacted by COVID-19. The organization’s relief efforts include clients of the RAVS and Pets for Life programs and hundreds of shelter and rescue organizations, representing communities across the country. By offsetting veterinary costs, providing food and supplies and assisting highly impacted shelters and rescue groups, the HSUS addresses these urgent, immediate needs, as well as furthers its mission to end cruelty against all animals.

Rob Thomas is one of the most distinctive artists of this or any other era – a gifted vocalist, spellbinding performer, and acclaimed songwriter known worldwide as lead singer and primary composer with Matchbox Twenty as well as a multi-platinum, multi-Grammy award winning solo artist. Thomas made history with “…Something to Be,” his first solo effort, being the first album by a male artist from a rock or pop group to debut at #1 on the Billboard 200 since the chart had debuted. He has written songs with many artists, including Willie Nelson and Mick Jagger. His collaboration with Carlos Santana was declared the all-time #1 song on Billboard’s “Adult Pop Songs” radio airplay chart, the #1 song of the rock era based on chart performance on Billboard’s Hot 100, and recently was declared to still hold the spot as the #2 most successful song of all time by Billboard. Thomas has contributed to sales of more than 80 million records. In 2004, he was the first-ever honoree of the Songwriters Hall of Fame’s prestigious Hal David Starlight Award, created to recognize a composer in the early years of his or her career. He has won numerous BMI and ASCAP Awards, and has earned the Songwriter of the Year crown from both Billboard and BMI. Thomas is also a dedicated philanthropist, establishing Sidewalk Angels Foundation with his wife Marisol Thomas in 2003.

Gavin DeGraw is a multi-platinum singer, performer, and songwriter. He first broke through with the 2003 release of his debut album, Chariot, which sold over 1 million copies, earned platinum certification, and yielded three hit singles: “I Don’t Want To Be,” “Follow Through,” and the title-track, “Chariot.” DeGraw’s self-titled second album debuted at #1 on the digital sales chart and at #7 on Billboard’s Top 200 album chart in 2008, earning DeGraw his first Top 10 album. It spawned the hit singles “In Love with A Girl,” which Billboard dubbed “a rocking homerun,” and the gold-certified “We Belong Together.” In 2009, DeGraw released Free as a gift to his die-hard fans clamoring for recorded versions of his live favorites. His third studio album, Sweeter, was released in September 2011 and produced the smash single “Not Over You,” co-written with OneRepublic’s Ryan Tedder. The track reached #1 on the Hot AC charts, was a Top 10 hit on Top 40, and was certified double platinum. In 2013, DeGraw released his fourth studio album, “Make a Move,” which included the hit song “Best I Ever Had” and garnered rave reviews from such publications as Billboard, People and Entertainment Weekly, amongst many others. In addition, DeGraw was nominated for his first Grammy for “We Both Know,” the song he co-wrote with Colbie Caillat for the film “Safe Haven.” Gavin released his fifth studio album “Something Worth Saving” in September 2016, featuring singles “She Sets the City on Fire” and “Making Love with The Radio On.” Since then he has been consistently touring around the world, including sold out dates with the legendary Billy Joel. More at gavindegraw.com, facebook.com/gavindegraw, on Twitter @gavindegraw and Instagram @gavindegraw.

As the front man for the band bearing his name, Chris Daughtry has become one of the most visible and consistent rock and roll torchbearers of the 21st century. He has released five albums, all of which reached the Billboard Top 10 and have combined sales of over nine million copies in the U.S. Daughtry’s self-titled debut —  the best-selling album of 2007 — contained four Top 20 hit singles, including the Grammy-nominated smash “It’s Not Over.” “Leave This Town” also reached #1 in 2009, while 2011’s “Break the Spell” was certified gold. He has collaborated with artists from Timbaland to Vince Gill to Carlos Santana and took on the role of Judas Iscariot in the 2016 live television performance of “The Passion,” and fulfilled a lifelong dream by drawing the cover of a Batman comic which was rated one of the Top 25 covers of the year by BatmanNews.com.

Mars Petcare US, the world’s leading pet nutrition and health care business, has generously pledged to match the first $100,000 in funds raised during the concert. These grant funds, provided through Mars’ BETTER CITIES FOR PETS™ program, will be administered by the HSUS to help eliminate pet homelessness. The BETTER CITIES FOR PETS™ program, which has impacted hundreds of cities across the world, is designed to help communities become more pet-friendly, by supporting and advocating for safe and welcoming shelters that lead to forever homes and helping make more places welcoming to people and pets.

Sidewalk Angels Foundation is dedicated to providing critically needed funds and support to over 20 no-kill animal shelters and animal rescues, across the country, that help to fight for the rights and fair treatment of those with no voice.  Organizations doing amazing work, that desperately need our help to continue with animal rescues, adoptions, building proper shelter facilities, getting proper medical care, low cost spay and neuter programs, helping to teach children kindness and compassion through animals, and advocacy programs such as fighting against cruelty and working to fight against breed discrimination. The foundation also works with homeless shelters that provide for the displaced by meeting the physical needs of people and their pets in crisis; so that families in need are not forced to give up their pets. In past years, we’ve helped rescues with no physical structure other than some fencing and sheds, and no real funding, to build proper facilities with indoor and outdoor kennels. We were also able to help organizations across the United States with big cross-country rescues and large medical expenses incurred during these rescues. Sidewalk Angels is also committed to helping organizations dedicated to increasing public awareness through educational programs that focus on the frequency of violent crimes against animals, and the correlation between animal abuse and violent behavior towards people. Our hope is for Sidewalk Angels to continue to grow so that we will be able to help twice as many animal organizations across the US in the coming years, while continuing to make real change in helping those who have no voice.

Founded in 1954, the Humane Society of the United States and its affiliates around the globe fight the big fights to end suffering for all animals. Together with millions of supporters, the HSUS takes on puppy mills, factory farms, trophy hunts, animal testing and other cruel industries, and together with its affiliates, rescues and provides direct care for over 100,000 animals every year. The HSUS works on reforming corporate policy, improving and enforcing laws and elevating public awareness on animal issues. More at humanesociety.org. Subscribe to Kitty Block’s blog, A Humane World. Follow the HSUS Media Relations department on Twitter. Read the award-winning All Animals magazine. Listen to the Humane Voices podcast.

Better Cities For Pets™ is trademark of Mars Incorporated